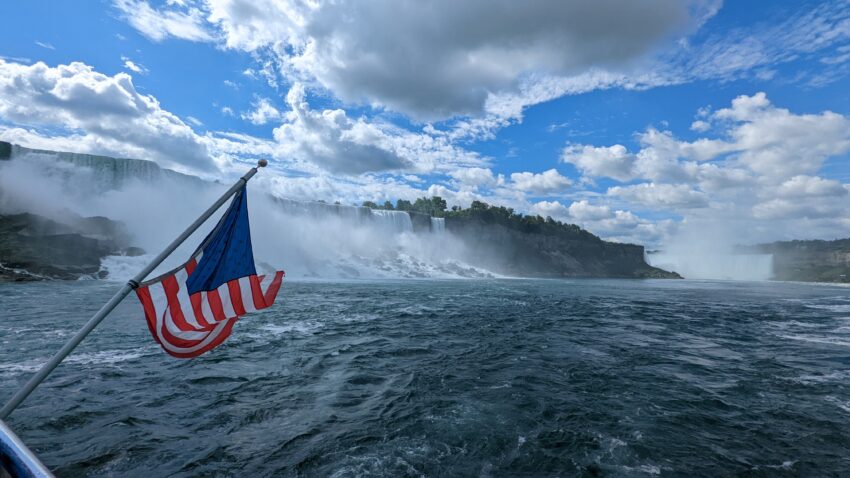 “We off,” Ron said after sticking his phone in the cubby and approving the navigation’s directions.

“So many people get married there; it seems like a good place to go for our anniversary.”

Ron had a good point, and I’ve always wanted to take a ride on Maid of the Mist. And so, after walking the dogs, we headed out on the two-hour drive across northern NY for our destination, the Aquarium of Niagara, where the shuttle bus picks us up at 9:45 for our 10:00 a.m. cruise.

We finally drove the road we could see from the cabin and realized that if you look closely, you can see it. Tucked in the mountains, our haven represents a piece of heaven on earth.

We listened to a message from Joel Kinnard about preparing our hearts for the inevitable. All the things we toil over on earth will disappear, but the things of heaven never will. Where your heart is, there your treasure is as well.

While waiting for our shuttle in the parking lot of the Aquarium of Niagara, I walked to the river’s edge and said hello to Toronto.

“I’m Pat R., don’t forget my name. Where’s you from?” Pat R.asked us in his heavy New York accent. Instinctively I knew we had a good day ahead of us.

I learned quickly that Pat R. always referred to himself as “Pat. R.” I loved when he would break the script to complain about traffic; someone asked if “we would be with him all day?”

We have people from Texas, Florida, and Massachusetts enjoying the tour. Riding with Pat R. as he picked up people provided entertainment. His thick accent, blunt retorts, and genuine smile made him incredibly lovable.

“You’ll be with me about three, three and a half hours. I’ll show you all there’s to see. I have one request, be on time. You look like a good group; I can tell these things. But be on time, or I”ll leave ya, don’t think I haven’t.”

After setting down the law, Pat climbed into his seat, and the fun began.

NY State Park System, the oldest in America, started in1885. Every stop on tour belonged to the park. Our time began at Prospect Park.

Maid of the Mist amazed us, lasting less than an hour. The cool mist hit our faces as the wind blew, and the boat rocked, with people, screaming all around us, life in full force.

Disappointment descended quickly when I discovered the action camera’s missing battery cover, meaning it got wet internally, and I may not have any footage. Thankfully, I didn’t lose any shots after letting the camera dry out overnight.

“Pat, I thought we were buds,” Ron said when Pat asked if we wanted a picture taken when we exited Maid of the Mist. Having battled for the past five minutes over selfies, Ron had enough picture-taking for the moment.

On the way to our next stop, we visited Dicamillo’s Bakery, where Pat R. ran into his friend Joey, a NY cop.

“Doin’ good, still kicking,” Pat R’s friend said as he scratched the top of his head, a half smile on his face.

Their conversation turned quickly to the uncontrollable crime in the area.

“I can’t get the paperwork filled out before they let them go,” said Joey.

“Yeah, million-dollar heist, and they get away with it.”

“I’m retiring and moving to Florida. Yeah, the new land of the free.”

Pat R. explained later he knew cops from his gambling days before the casinos.

“How many years?” I asked the couple in front of us. Earlier, I overheard them tell Pat R. they also chose Niagara Falls to celebrate their anniversary.

“Oh, I’m praying for that many, but we started late.”

“Lot of work, a lot of work,” the wife replied. Both smiling, they assured us, “It’s worth it.”

Whirlpool State Park, water from Niagara Falls flows down the Lower Niagara river and has for the past 12,000 years. Rapids occur when water spins at 25 mph in the river.

“I’m doin’ what they used to say is a solid.” Pat R. giving us his First in, First Out strategy for Cave of the Winds.

“Go in on the left, sit in the back row. That way, when the doors open, you can get right out. Trust me; you’ll thank me later.”

We did have to wait a bit with our Mennonite friends before we entered COW. Since I didn’t research the area and bought a group pass, I didn’t know what lay ahead. Walking up the wooden staircase beside the massive amounts of flowing water at high speeds, looking between the steps, and watching it flow beneath us unexpectedly.

But what a rush!

“Yeah, did you go to the Hurricane deck? That rock where the water hits, the big one, did you see that? Yeah, it was part of the original cave. In 1954 they had a controlled explosion; it came down.” Elevator Attendant.

Ron asked questions of the young man escorting us back to the top after finishing the tour. If our guide had a dollar for each time people asked the same thing, he wouldn’t need to push elevator buttons for a paycheck any longer. Amicable, he didn’t mind Ron’s interrogation.

If you have 30 minutes, you can visit Goat Island, 1.5 miles in circumference, a beautiful sight to see. Pat R. took the opportunity to show the group an example of rapids. We didn’t stop, but the oohs and aahs echoed through the tour bus as we passed on our way to a “surprise” stop.

“Since we have time, I’m gonna take you to what I think is the most beautiful sight in Niagara Falls. When I stop, you have five minutes to walk to the end of the trail and back, but it’s worth it.”

Pat R.’s decision to take us to Three Sisters Island, which links to Goat Island by three separate historic walking bridges, created the perfect ending to a lovely day of touring.

“I’m titling mine, “Niagara Falls Experience with Pat R.” Said the guy behind me on the bus. My fellow tour member nailed his title on the head. Pat R. made our experience extra special with his no-nonsense, blunt style you can’t help but love.

We learned something new while driving through an Indian reservation on the way back to our love nest. Pot shops lined the country roads. Retail shops, from trailers to small buildings, hung their shingles to sell marijuana.

We didn’t know our trip home took us through an Indian Reservation, nor that tribal governments have their own rules and regulations about retail sales and cultivation of marijuana in New York. But we do now. We realized our location because of all the pot shops, which made us wonder what the heck?

“They’re not paying taxes; it’s all going in their pockets,” said Ron.

Curious, our research led to the Marijuana Regulation and Taxation Act, which New York hopes to finalize by the end of the year. In doing so, recreational pot shops will begin opening statewide, not just on Indian reservations.

“Everyone is family here at the Redwood.” The motto of our anniversary restaurant of choice, Redwood Restaurant, held. Our waitress made our evening special, helping us celebrate our first decade together. She brought us a chocolate chip cookie and ice cream dessert to top off a delicious dinner.

“You’ve taught me I’m not the easiest person to live with over the last ten years. Don’t worry; you did it with love,” I said during our toast.

Marriage, I had a lot of opinions about it, but actually doing it changed them all.

Praise God for the first ten, praying for a few more decades together.